For seven minutes late Monday morning, a crowd of more than 150 onlookers sat at Hancock College’s Marian Theater in silence, waiting to hear a beep from a spacecraft nearly 100 million miles from Earth.

With all eyes on a screen placed at the center of the stage, viewers watched as scientists from NASA’s Jet Propulsion Laboratory in Pasadena monitored the entry, descent and landing of InSight, NASA’s newest mission to Mars. Entering the red planet’s atmosphere at 11:47 a.m. PDT, the lander had seven minutes to jettison its heat shield and activate the parachutes, radar and propulsion system needed to slow the craft down from its 12,000 mph peak. 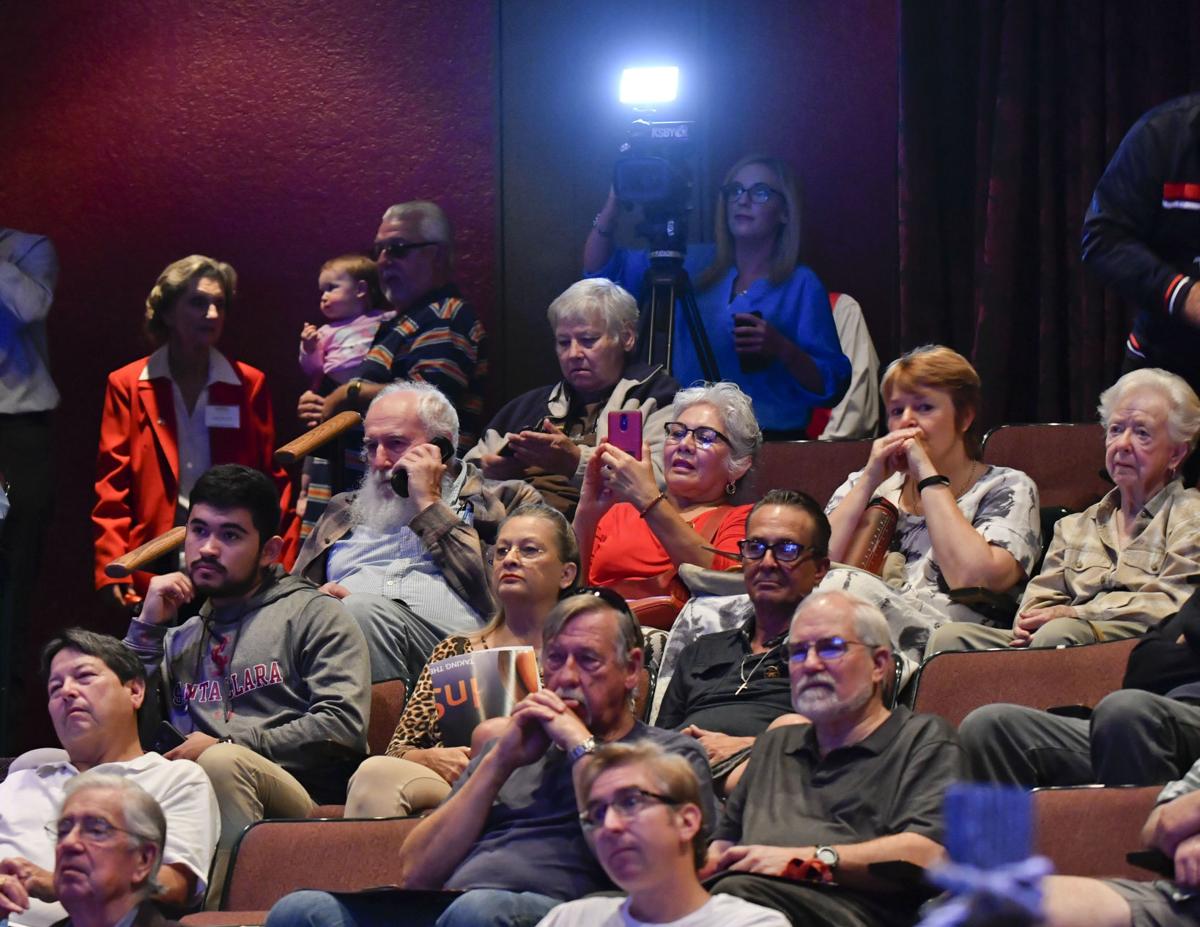 Spectators wait for NASA’s InSight to land on Mars. By Len Wood, staff

At 11:54 a.m., mission staff had an announcement: InSight stuck the landing. The crowd in the seats and on the video feed erupted into cheers and applause.

“Today ended up being a very good day, but there was always that moment of insecurity,” Brian Day, planetary visualization and analysis lead for NASA’s Solar System Exploration Research Virtual Institute, said after the craft successfully landed on the martian surface.

“InSight took a very difficult path to get to Mars: It had to come in as a flaming fireball … deploy a supersonic parachute, use radar to acquire the ground and rockets to guide it down safely. All of those things had to work just right.”

After years of planning and preparation, NASA launched InSight from Vandenberg Air Force Base on May 5. The agency’s first interplanetary mission to originate from the West Coast, InSight is NASA’s first successful landing on Mars since Curiosity touched down in 2012.

“In the history of humanity flinging expensive hardware at Mars, we’ve had a success rate of something less than 50 percent,” Day said earlier that morning. “We’ve had, out of 55 missions, only 25 successes. This is something very challenging we’re about to see today.”

Jerry and Irma Estrada described their viewing experience as exciting and astonishing. “Over the course of years you hear about our technology advancing, but here you get to see it firsthand,” Jerry Estrada said. “To have it go so well is awesome.”

The longtime Santa Maria residents have heard countless launches take off from Vandenberg but had not closely followed their payloads or missions. Things were different with InSight. The close proximity coupled with the mission’s scientific firsts — the lander will measure Mars’ heat flow and seismic properties — made the two want to follow the developments more closely.

“It’s really fascinating to know that all the information is going to come back, and we’re going to be able to see it,” Irma Estrada said.

Day originally believed the first photos from the craft would come on Tuesday, but the two Mars CubeSats that accompanied the lander transmitted a debris-caked picture of a relatively flat martian surface — devoid of the major rocks and debris scientists had hoped to avoid — shortly after it touched down.

“These provided a special communications link that gave us information coming from InSight far more quickly than we otherwise would have,” he said. “This was a technology demonstration. We weren’t counting on it but, boy, was it nice to see it work.”

Across town, students from St. Mary of the Assumption School built spacecraft landers from plastic cups, tape, marshmallows and other household items during a special viewing party held at the Santa Maria Valley Discovery Museum.

“Our students visit the Discovery Museum several times each year, but today was extra special,” said Michelle Cox, principal of St. Mary’s School. “From climbing the Mars wall to building landers to watching NASA’s broadcast and Insight’s first picture from Mars live, our students will remember the historic events for a lifetime.”