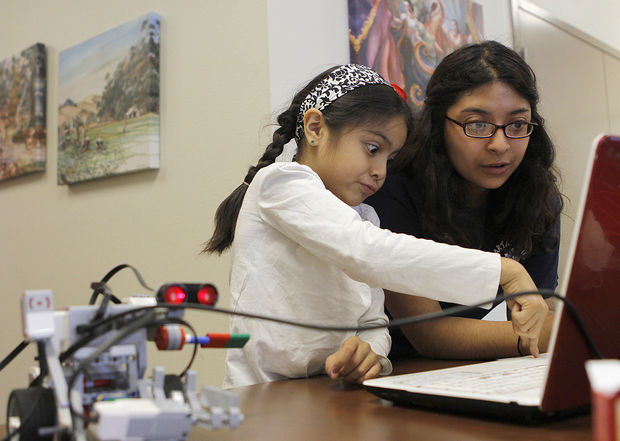 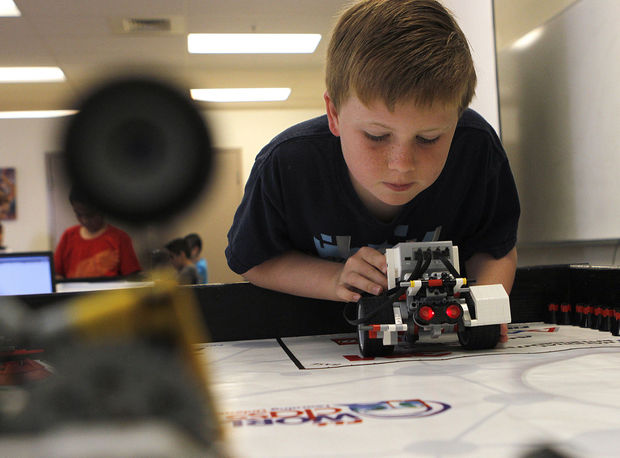 With cheers and groans, young engineers showed off their skills by putting their creations to the test Friday afternoon for the culmination of a crash course in robotics.

They marked “graduation” Friday with a friendly Battle of the Bots competition — based on the FIRST Lego League events— as the young engineers demonstrated their robots’ abilities.

“What’s really impressive about all the children here is they participated in what is usually a six-week program in just a matter of a week,” said Charlie Miller, an Orcutt Academy graduate from 2014. “This is very much a crash course to robotics, and I think they all did a fantastic job.”

Various challenges were set up on two tables with children able to demonstrate their robotic building and programming skills while earning scores.

“It’s really for them to put what they’ve learned to good use by having real world competition that’s tangible and hands-on, so it’s not just programming in a bubble, it’s programming with a purpose,” said Amy Asman Blasco, program director for the Discovery Museum.

Nine-year-old Andrew Garcia of Orcutt said the camp taught him about programming and another critical skill — patience to get the robot to turn. 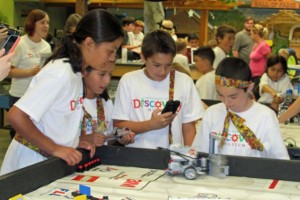 Robotics 101 camp members watch as their robot completes an obstacle during the Battle of the Bots at the Santa Maria Valley Discovery Mueum on Friday. (Janene Scully / Noozhawk photo)

“It was fun because we got to learn things about robotics and technology,” Andrew said.

He was part the team named The Shockers, and was pleased by their robot’s first two runs.

“It’s pretty good, but it’s having some problems with some of the tests,” he said.

He competed against his sister, Isabella Garcia, 11, who was on another team, Crazy Tech.

“It was actually pretty fun,” she said of the robotics camp. “I love programming it but it was very hard.”

For one challenge, her team’s robot successfully hurled a ball at the target, as cheers erupted from spectators.

The Discovery Museum typically hosts summer camps with different themes during July, and hopes to include another robotics program in the future offerings, Blasco said. The robotics camp was so popular it had a waiting list.

Serving as mentors lets the teens inspire the next generation of scientists and engineers, Fredriks said.

“We need an excited teacher and a couple of excited parents,” he said. “If I can get three motivated adults then they can run a team and it doesn’t take experience. You don’t have to know how to build a robot or know how to program. That’s what the kids learn. They’re good at that, as we saw today. That was so much fun.”

“We realize the power of STEM (science, technology, engineering and math), especially if we get into an under-served population. This could be a ticket out. This could give these kids an opportunity to become engineers.