When children and their families showed up at the Santa Maria Valley Discovery Museum for Science Saturday, they probably didn’t expect to get soaked by exploding water and liquid nitrogen, or to freeze hot dogs and marshmallows.

Students from Hancock College’s physics department conducted various science experiments with the children Saturday morning to increase their interest in the science fields.

Demonstrations included a superconductor and magnetic field experiment, freezing balloons and hot dogs in liquid nitrogen and learning how waves work with a tsunami tank, funded by a megathrust tsunami grant.

“If you expose them early, you give them something to grow from,” Jorstad said. “Learning doesn’t happen overnight. The earlier they get that foundation, the earlier they’ll be motivated and be interested to learn more.” 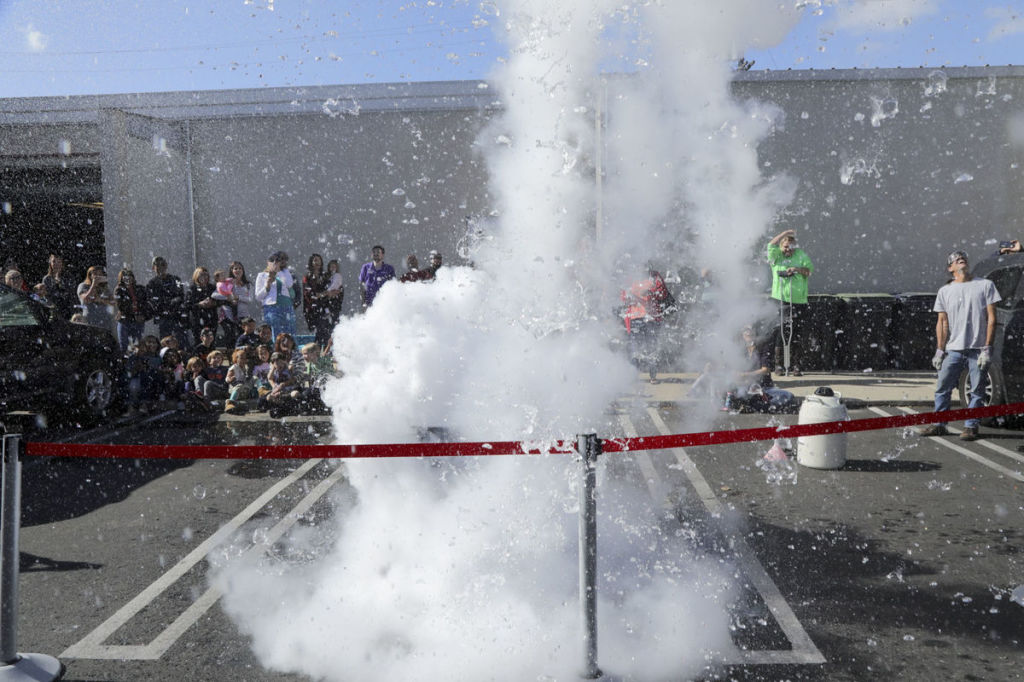 Photo By Frank Cowan, Contributor. An explosion of liquid nitrogen and water cover children and families at the Discovery Museum’s Nov. 19 Science Saturday.

The professor said that during the process of exposing the children, his physics students also learn a lot.

“They get the amazing experience of feeling like they’re helping the community,” he said. “They get excited and feel like they’re an expert on something.”

One student, who was demonstrating magnetic fields and superconductors, said that it’s important to get kids interested at a young age.

“It’s important to come back and encourage kids like I was encouraged at a young age,” said Juan Macias, a student at Hancock. “They’re so impressionable. I think it’s cool to see them excited about science.”

Engineering student Maria Munoz, added, “Physics in general relates to a lot of things. It’s good for kids to understand how things work.”

“Being exposed to these types of events would have been nice when I was young,” she said.

All of these experiments led up to the moment the children had been waiting for with anticipation: the volcano explosion.

As they gathered around in the parking lot, Jorstad explained that they had filled a trashcan with around 30 gallons of water, and that the students would fill a bottle with liquid nitrogen and put it inside.

“Liquid nitrogen is around 200 degrees colder than air,” he told them. “When liquid nitrogen comes into contact with water, it will heat up very fast and expand.”

The children screamed as the water eruption soaked them, their parents and Hancock students.

“That was bigger than I thought it would be,” Jorstad said laughing.

One girl from Arroyo Grande expressed her excitement.

“Water was going everywhere, and then water rained down on us!” said Kailani Johnson, an 8-year-old in second grade.