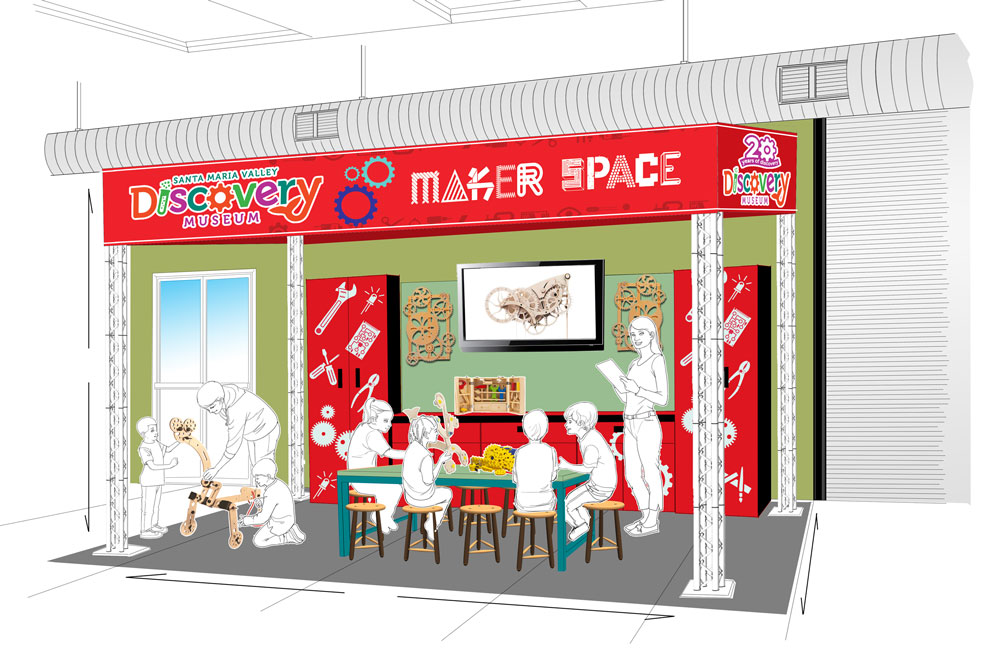 An artist’s concept depicts the Santa Maria Discovery Museum makerspace, one of three in the city to benefit from the California Community Colleges grant to Allan Hancock College. The Santa Maria Public Library is the third makerspace (Contributed)

A unique collaboration that led to a grant to expand the makerspace movement in the Santa Maria Valley also will boost the Discovery Museum’s revitalization efforts and inspire youths to create.

Allan Hancock College, the Discovery Museum and the Santa Maria Public Library have joined forces for makerspaces, leading to receiving a $350,000 grant from the California Community Colleges this summer.

Makerspaces are places for youths to think outside the box to create — whether painting a picture or crafting a bridge with sticks, tape and cardboard, according to Chris Slaughter, executive director of the museum.

The goal is to spur skills in STEAM — science, technology, engineering, arts and math — via hands-on activities.

“It harnesses all of those concepts and puts it in a specialized dedicated space that allows kids to experiment, tinker and use their imagination in ways they’re not used to doing,” said Amy Blasco, program director. “It’s a huge opportunity for them to explore all different kinds of educational concepts in STEAM.”

The “art from scrap” Creation Station has been expanded to form the Maker Lab and include daily, hands-on, self-directed activities for youths, giving them assorted supplies to encourage creativity with items such as egg cartons and duct tape. 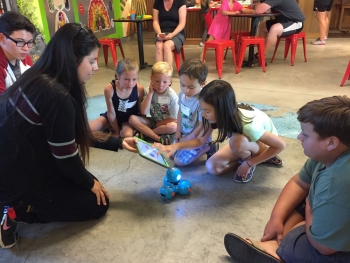 The Santa Maria Valley Discovery Museum Brain Builders program gives youths hands-on experiments and lessons in science, technology, engineering, arts and math. The museum is one of three organizations expected to benefit from a makerspace grant to Allan Hancock College, with the third being the Santa Maria Public Library. (Contributed)

“For us, we’ve noticed that peer-to-peer relationships between a young child and a college student is a huge opportunity for learning, because younger kids really look up to college students and they can see themselves in college students more readily than in adults,” Blasco said.

The library, museum and community college had been working to create makerspaces — each with its own twist — when they joined forces under Robert Mabry, associate professor of machining and manufacturing at Hancock

Hancock was one of 24 community colleges to win a grant.

“These 24 colleges have demonstrated their commitment to establishing makerspaces, placing students in internships, developing curriculum that prepares students with 21st century skills and participating in a statewide network of college makerspaces that are tailored to meet the needs of regional economies,” said Van Ton-Quinlivan, California Community Colleges vice chancellor of workforce & economic development.

The collaboration built upon Hancock’s popular Friday Night Science Night to turn into a full weekend of makerspace activities at the library and museum attracting approximately 2,000 participants.

“After the success of the Maker Fair weekend events, all three institutions came away convinced there is a market for this movement,” Mabry said.

Grant funds will allow the three groups to purchase equipment, such as 3-D printers and supplies.

Hancock’s makerspace will open the Computer Aided Design (CAD) lab, machine and welding labs to students, faculty and the entire community to provide a safe platform for tinkering with projects.

Meanwhile, the library and Hancock will have their own makerspaces under their roofs.

Student interns will monitor the labs and use a cargo trailer to set up makerspaces in schools and other sites, officials said.

Later this month, representatives of the three organizations will attend a kick-off event for grant recipients in Berkeley to gather more information

“It’s a huge opportunity for the museum and the Central Coast,” Blasco said.

The makerspace is one of many changes planned as the Discovery Museum marks its 21st year.

The museum has an outdoor ocean-themed exhibit in the works, a “science of farming” exhibit and  the Vandenberg launch exhibit, unveiled in May.

The organization’s key fundraiser, Night at the Museum, on Sept. 23 will raise funds for museum programs and the Vandenberg Launch Experience exhibit with sponsorship and ticket information available here.

“It’s wonderful. Good things are happening,” Slaughter said. “It’s been a process but we thank the community and the foundation for the support that we get, which is pretty amazing.”