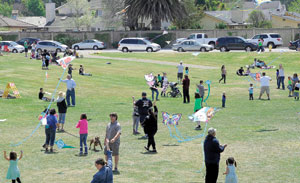 “It’s just such a beautiful day. At noon the wind kicked up and the kites went into the air,” said Discovery Museum executive director Chris Slaughter.

The event featured live music by the children’s rock band Birdie, food vendors and nonprofit booths, and kite demonstrations. Kids had the chance to test their might against the wind during the “Running of the Bols,” a race in which participants raced with giant parachute kites strapped to their backs.

Maria Valencia of Santa Maria brought Julian Valencia, 6, and Emma Pope, 9, for the first time. “I think it’s lovely. It’s a great time for family to get together,” Ms. Valencia said.

Emma was flying a Hello Kitty kite but she spied a few others she liked. “It’s very pretty to see all the kites flying. I like that ladybug over there,” she said.

Julian had a dragon kite but he also saw a few others he admired. “I really like that black dragon one over there,” he said pointing to the skies.

Ana Dominguez and Spencer Copeland manned the Kite Hospital, a new addition to the annual festival. “If we can fix them, we fix them, if we can’t we give them a new one. As long as everyone is happy, we’re happy,” Mr. Copeland said.

Ms. Dominguez said that with so many kites there was one kite injury that was most common. “Tangles. Definitely tangles,” she said. “We’ve been pretty busy, people just keep coming and coming. It’s been fun.”

One of those people was Madison Careyette, 6, of Santa Maria. Madison smiled contently as the Kite hospital fixed her kite.

“They made a very happy 6-year-old. I got it all tangled and they cut it and gave us a new one. It was a big help,” said her mom, Monica Careyette.

Ms. Slaughter said it was too early to know just how many attendees the event attracted but estimated about 2,000.