While some moviegoers stood in line Thursday afternoon, a handful of Star Warsfans undertook epic, enthusiastic and energetic lightsaber battles on behalf of the galaxy.

Youngsters, shy at first, soon faced off against the Star Wars characters, getting into intense lightsaber battles after learning the ways of The Force.

Despite the fierce battles, complete with jumps, spins and more fancy moves by the youths, there were no tears and only a few “ouches” heard above the sounds of the plastic lightsabers slamming against each other. 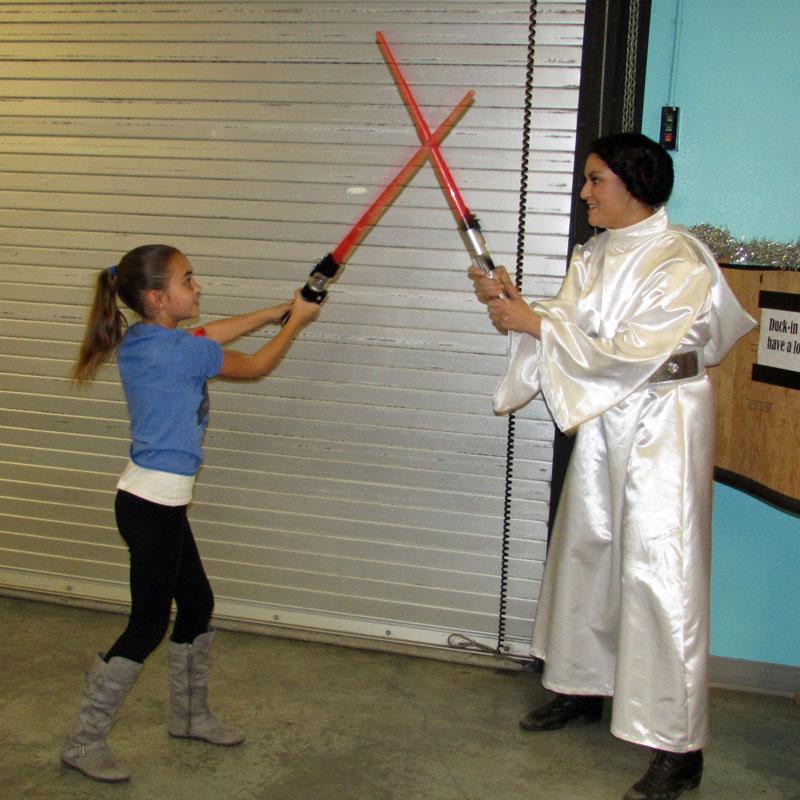 “We sense a disturbance in The Force because there has a been a misuse of lightsabers run rampant on planet Earth,” said Amaris Taylor, the Jedi knight from A Wish Your Heart Makes.

“We’d like to show you the proper use of said weapon,” she told the youths. “It is not as clumsy, you see, as a blaster. It’s more stealth, more accurate. You can do a lot of damage with this  weapon. But you can also use it for a lot of good.”

She was accompanied by Princess Leia, portrayed by Jess Bernal.

“The messages we’re trying to deliver is proper safety for when you do happen to find yourself in a lightsaber battle, proper technique and looking for recruits to fight the Galactic Empire,” Taylor said.

“We’re looking for able, young Padawans, as those present here today, to help join the the fight against the Galactic Empire,” Taylor added. “The Rebel Alliance needs recruits so if you know of anyone.”

The youthful Jedis-in-training also learned the proper stance for using their lightsabers, making sure to have a firm foundation to provide balance while giving and getting hits.

Other safety tips, that make sense whether lightsaber, sword or old-fashioned stick, also were shared.

“You want to make sure that it’s a fair distance from your face and your body at all times because as you know these things can get very very hot and that’s how they’re used to defeat certain enemies,”  Taylor said. “I want to make sure all the action is happening away from my face and away from body.”

“See, Princess Leia has very proper form over here. She’s been at this for years, being well-trained in The Force and the Rebel Alliance.”

As one boy battled seemingly with unlimited energy, his grandmother told Princess Leia, “You can tell him when you’re done.”

“It was pretty cool,” added Kendall Courtright, 10, of Orcutt, explaining she enjoyed learning to use The Force and be a Jedi.

They plan to see the movie Saturday, with Kendall explaining she likes the action and battles in the series.

Another lightsaber lamented when the battles ended.

“I’d like to stay here forever,” the boy said.

The lightsaber skills demonstration is the latest Star Wars-themed activity this month at the Discovery Museum.

“Star Wars is a multi-generational phenomenon that people of all ages can enjoy together, just like the Discovery Museum,” said Amy Blasco, program director.  “We wanted to share the excitement of the new movie, Star Wars: The Force Awakens, by awakening the force within our patrons.

For December, many of the activities at the museum have combined Star Wars and holidays. For instance, youngsters made R2D2 dreidels and a lightsaber Menorah for Hanukkah.

On Sunday from noon to 2 p.m., the museum will host Santa’s Discovery Workshop, with a visit from Santa, crafts and some Star Wars links. At the end of the month, children’s will ring in 2016 with the Noon Year Eve celebration Dec. 31. The nonprofit organization’s list of events can be found here.