Hobnobbing with Helen: A Night at the Museum

Wow! What a cool thing to do.

I’m not talking about the mermaid with a purple whatever, perched on a platform, or the medley of exquisite mini-desserts and the made-onsite beignets from Chef Rick. (Well, to be fair, these were all cool, too.)

I’m talking about the science exhibits at the Discovery Museum’s fundraiser, A Night at the Museum, held on Saturday evening, Oct. 3.

Physics faculty member Rob Jorstat and student Duncan Cameron shared their enthusiasm for their project with me. They had spent the morning at an elementary school in Guadalupe, dazzling the youngsters with the illuminated topographic map model, the reverberating tennis balls, and the—oh, my goodness, I don’t know what it was but it looked like a little racing car on a track. 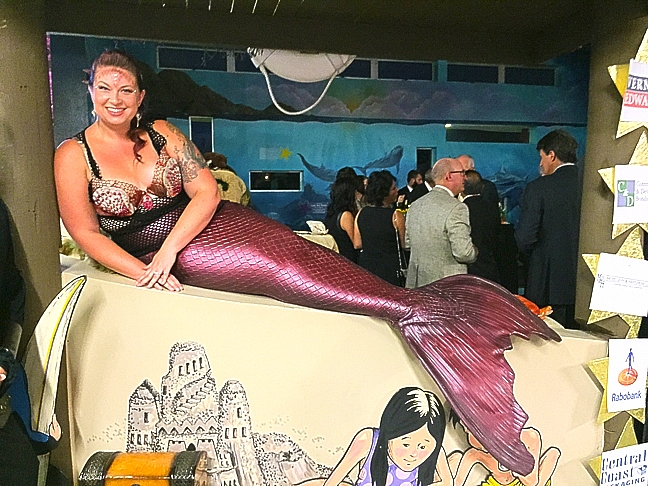 Physics was never my strong suit, but I think it’s important to know about gravity and such, don’t you?

Chris Slaughter, Discovery Museum executive director, presided over this important event that attracted board members like CASA Executive Director Kim Davis, Bill Thompson, and Roy Reed. Also in the crowd was Allison Smith, who’s been active with Hats for Hope.

Another board member, Hancock instructor Emily Smith, praised the value of the Discovery Museum to the community when she told me, “The support and supplemental education that the museum provides to our local schools is awesome.”

Did I mention that this was a dress-up affair—a red carpet night?  Many guests wore long dresses, while volunteers dressed as pirates and cowboys.

Ms. Slaughter was all aglow in her totally glam gold sequin dress, as she announced plans for the museum’s future.

Personally, I can’t wait to see the proposed space exhibit, the planning of which will involve personnel from Vandenberg. I’m also jazzed about the envisioned tree house, where youngsters can take refuge and read.

The science demo wasn’t the only thing going on at this event. There were industrial strength hors d’oeuvres from Trattoria Ulivieto: meatballs, stuffed mushrooms, grilled prawns, sausage, and gnocchi with blue cheese sauce as well as the aforementioned, irresistible sweets from Chef Rick.

A live auction emceed by Wendy Thies Sell (full disclosure: she is food and wine guru/writer for the Sun) and conducted by the fast-talking Todd Ventura was part of the program.

It was a pleasure to run into the executive director of the Dunes Center, Doug Jenzen. I have lovely memories of their most recent sphinx-oriented gala. Jenzen proudly reported that the Dunes Center has experienced a 25 percent increase in visitors because of the presence of the fabled sphinx unearthed from Cecil B. DeMille’s movie set for The Ten Commandments in Guadalupe.

Vince Surra and Mollee Barse at the Discovery Museum’s annual fundraiser held on Saturday evening, Oct. 3. Vince and Mollee volunteered to dress up and be part of the fun. Photo by Amy Blasco

The gobs of media attention that the Sphinx attracted, he said, paid off in attendance gains.

Jeff Barnes, Pat McDermott, the consummate caddie Ed Murray, and thegang from the Santa Barbara Foundation—Kathy Simas, Lynnette Muscio, and Diane Adam—came out to support the cause.

“We worked long and hard on this event,” the museum’s program director Amy Blasco told me.

Well, Amy, the hard work showed. The evening was totally engaging and provided the impetus to visit the museum again and again. It’s fun for adults, too.

If you want to hobnob with Helen, you may contact her at helenthom232@yahoo.com.