In Countdown to Launch, NASA and JPL Go All Out on Mars InSight Education and Events

Saturday’s blastoff to be preceded by week of out-of-this-world exhibits and presentations, including screenings of War of the Worlds and Mars Attacks! 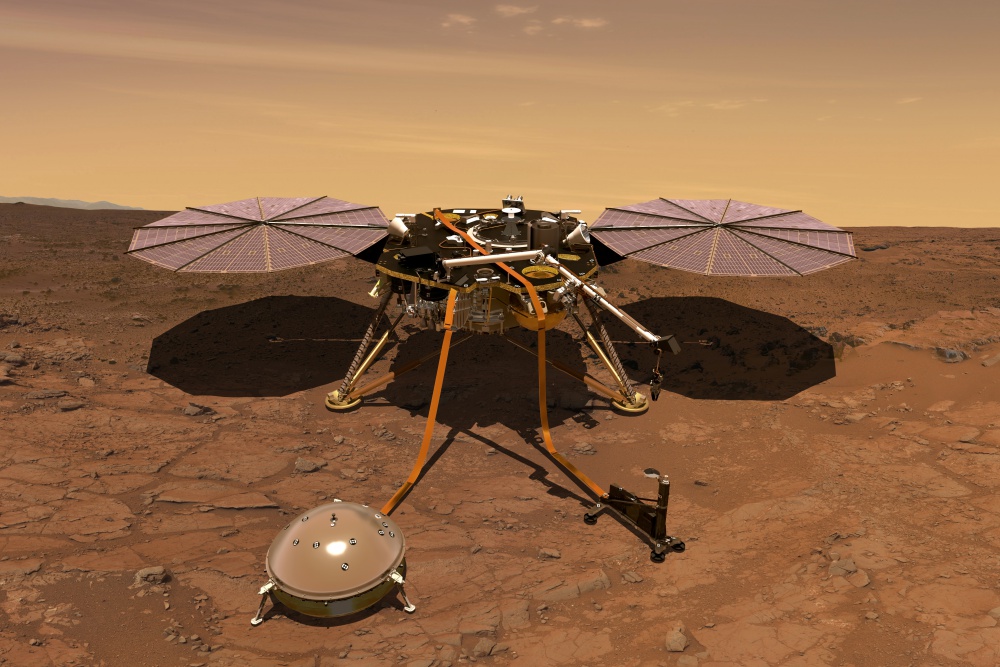 An artist’s rendering depicts the InSight lander operating on the surface of Mars. InSight is a lander designed to give Mars its first thorough checkup since it formed 4.5 billion years ago. (Hewlett-Packard Co. rendering)

A Mars InSight Roadshow, a special teacher workshop, space-themed films and other presentations related to the Red Planet will land in Santa Barbara County ahead of the NASA spacecraft’s launch from Vandenberg Air Force Base.

Multiple events are planned by NASA and the Jet Propulsion Laboratory in connection with the West Coast’s first interplanetary launch, with Allan Hancock College declaring Mars Week from Monday through Friday.

InSight — short for Interior Exploration using Seismic Investigations, Geodesy and Heat Transport — is set to launch during a two-hour window opening at 4:05 a.m. Saturday aboard an Atlas V rocket that will blast off from Space Launch Complex-3on South Base.

The spacecraft will travel to Mars to study its deep interior, with scientists hopeful of learning about Marsquakes.

In anticipation of the launch, scientists and engineers will set up exhibits and make several presentations around the region.

Exhibits will be set up 10 a.m. to 4 p.m. Wednesday and Thursday at the Santa Maria Valley Discovery Museum, 705 S McClelland St., and Wednesday at the Dick DeWees Community & Senior Center, 1120 W. Ocean Ave. in Lompoc.

Before arriving in Santa Barbara County, the Roadshow made several stops, including last week in San Luis Obispo and elsewhere in California.

From 6:30 to 8:30 p.m. Thursday at the Grossman Gallery in the Lompoc Public Library, 501 E. North Ave., two of JPL’s women engineers involved in the Mars InSight lander mission will give a presentation to help inspire future generations. The free event is hosted by the Vandenberg Amateur Astronomical Society and the Jet Propulsion Laboratory.

Meanwhile, kindergarten through 12th-grade teachers will get special insight into the Mars mission with a focus on hands-on learning during a workshop in Lompoc.

The Endeavour Center, and other co-sponsors — the Vandenberg Section of the American Institute of Aeronautics & Astronautics, United Launch Alliance and the Lompoc Unified School District — are organizing a Mars InSight K-12 Teacher STEM Workshop at the DeWees Center from 4 to 7 p.m Wednesday.

Reservations for K-12 teacher signups can be mailed to Edmund Burke at director@endeavourinsitute.org. The deadline is May 1.

At Hancock College, the Associated Student Body Government will launch the festivities from 11 a.m. to 1 p.m. Monday in the Commons on the Santa Maria campus, 800 S. College Drive. Students can build foil hats similar to those made in the movie Signs, the 2002 sci-fi horror film. Visitors can race Mars Rover remote-control cars and write messages to Martians on an interactive white board.

From 3 to 7 p.m. Monday, the public can view two space-themed movies during the Mars & the Silver Screen Film Festival. Hancock faculty will lead a group discussion and screen the movies War of the Worlds and Mars Attacks! The films will be screened in The Forum (building C, room 40) on the Santa Maria campus.

The film festival moves to the college’s Lompoc Valley Center, 1 Hancock Drive, from 1- 5 p.m. Tuesday. Movies will be screened in building 3, room 114.

At 2 p.m. Tuesday, the college will dedicate two student murals — Looking to the Future and Unknown Endeavor by Ruben Espinoza — in the courtyard of the Lompoc Valley Center, located between buildings 1, 2 and 3.

Also Tuesday, community members will get the chance to hear about the historic mission from NASA’s chief scientist, Jim Green. He will provide a free presentation at 7 p.m. Tuesday inside the Marian Theatre on Hancock’s Santa Maria campus.

After NASA officials visit with Hancock students and faculty Wednesday, they will host an open lecture from 3:30 to 5 p.m. Thursday in building M, room 310 on the Santa Maria campus. Seating is limited to the first 99 people.

Later in the week, NASA will set up interplanetary exhibits inside the Student Center on the Santa Maria campus. Visitors will be able to experience space travel and realistic views of planets and the solar system through virtual reality and state-of-the-art computer simulations. NASA’s exhibit will be open from noon to 4 p.m. Thursday, and again from 1 to 8:30 p.m. Friday.

Mars Week comes to a close Friday when the college hosts Friday Night Science. The annual event includes spectacular scientific demonstrations and hands-on learning activities from 6 to 8:30 p.m. in and around building M on the Santa Maria campus.