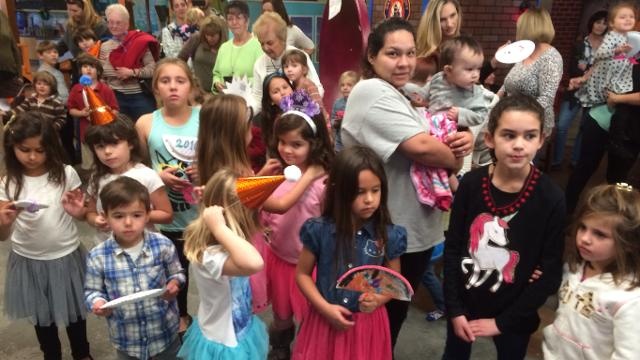 SANTA MARIA, Calif. – 2016 arrived early for dozens of kids at the Santa Maria Valley Discovery Museum on Thursday, as the popular downtown museum held its annual “Noon Year’s Eve” to ring in the new year.

“We’re so excited to have our kids and parents all here, making noise and cheering on the new year! We did a countdown to noon and it was really fun,” said museum executive director Chris Slaughter.

For the kids, who were mostly under the age of 10, many will be fast asleep when 2016 officially begins at the stroke of midnight.

“I think it’s a lot of fun, and it allows them to experience of doing a count down and a party without having to stay up too late,” said Anna Urie

The four-hour long party was complete with party favors, which kids were able to make themselves, as well as celebratory apple juice and snacks.

“It’s better because it’s not crazy out and stuff. There’s lots of things to do,” said 9-year-old Kaylynn Carreira.

The entire 1300-square foot museum was open for those in attendance to play and discover its many educational and entertaining exhibits. For many families, Noon Year’s Eve was the first time they had ever visited the museum, which is located just south of the Paul Nelson Aquatic Center on S. McClellland Street. It gave them an opportunity to explore the oldest children’s museum in Santa Barbara County.

“It’s all about the power of play, interactive learning experiences. We have exhibits and programs every day, it’s a great place for kids and parents to learn together,” said Slaughter.

For most parents, they had just as much fan as the kids, and for many, particularly those with toddlers and younger, they were happy they too were getting the chance to celebrate New Year’s a little bit early.

“I have an almost two-year-old and a five-year-old, so it’s going to be tough to make it to midnight, so it’s fun to be able to celebrate beforehand,” said Tanya Villegas of Orcutt.

2016 will mark the 20th anniversary of the Santa Maria Valley Discovery Museum, which will soon transform itself over the next few months with several new exhibits added. Among the planned exhibits slated to open will be “Amazing Airways,” “Moxie My Plate Cafeteria,” and Discovery Farms Berry Truck. Also scheduled to open in the future will be the “Mission to Mars Space Launch Center.”

The museum is inviting the public to donate to its capital campaign to help finance the completion of its planned projects. For more information, visit smvdiscoverymuseum.org