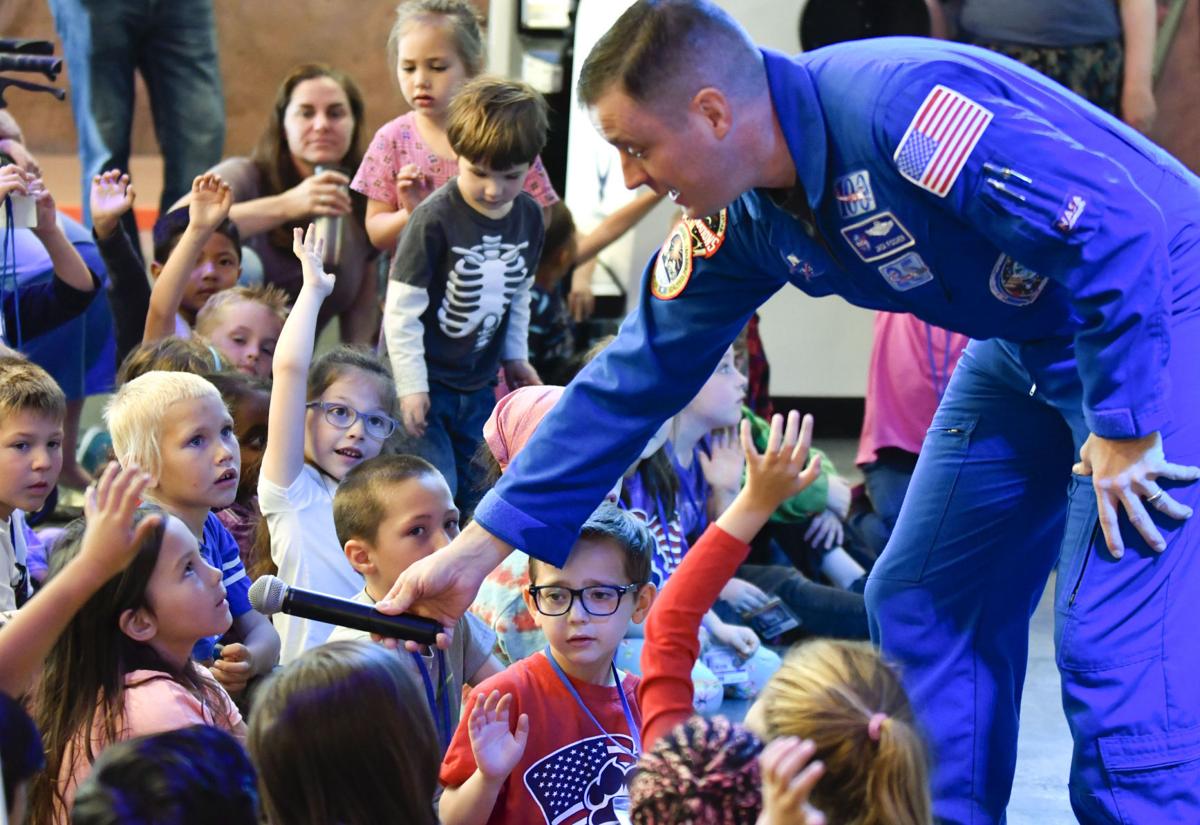 Community members met a real-life NASA astronaut at the Santa Maria Valley Discovery Museum on Thursday, when they heard about his five-month mission to outer space in 2017.

Both parents and children listened intently to Col. Jack Fischer, Air Force command pilot and astronaut, who served as engineer aboard the International Space Station. During his mission, Fischer logged 136 days in space, including two spacewalks.

“This is exactly what we hoped for with our educational partnership agreement with Vandenberg Air Force Base,” said Chris Slaughter, executive director of the Santa Maria Valley Discovery Museum.

During Fischer’s recent visit to the base, Vandenberg officials facilitated a presentation event with the museum to share his experiences in space, according to Slaughter.

“We want kids to be excited for STEM learning and understand the massive job opportunities out there, and Vandenberg is right in our backyard,” she explained. “We want them to see the exciting things that are being done — like sending people to Mars or the International Space Station. Most kids today probably never met a real-life astronaut before; I know I haven’t!”

Fischer, from Colorado, was selected by NASA in July 2009 as a member of the 20th NASA astronaut class and completed training in July 2011.

On April 20, 2017, Fischer launched from the Baikonur Cosmodrome in Kazakhstan to the International Space Station with Russian cosmonaut Fyodor Yurchikhin. He returned to Earth on Sept. 3, 2017, after completing hundreds of scientific experiments and learning how to eat, sleep and go to the bathroom while floating around the aircraft.

“We had to do all sorts of training, different tests, prepare our bodies and quarantine ourselves so that we don’t get sick in space,” Fischer told the crowd. “We then said ‘goodbye’ to our families and headed out!”

About eight minutes into their voyage, the crew used a stuffed animal tied to a string to gauge their location.

“Once it began floating around the aircraft, that’s how we knew we made it to space,” Fischer said.

The crew then tracked down and located the International Space Station. Upon arrival, the crew was greeted with hugs by other astronauts and engineers aboard. They also held a press conference letting everyone know they had arrived safely.

When his wife asked Fischer what he thought of being in space, he answered, “It’s a burrito of awesomeness. It’s so beautiful.”

Since space doesn’t have convenience stores floating around, crews have to get all their supplies from different vehicles, like the Cygnus OA-7, Fischer told the children.

Videos of Fischer and his crew attempting to eat liquid foods while floating around the aircraft also were shown, much to the delight of the audience. Following the video presentation, Fischer answered questions from the crowd.

“Food always floats,” Fischer told an inquiring girl, “which can be really cool or frustrating. Sometimes you make a mess and it floats away or it goes into your buddy’s eyeballs, so it can be kind of a bummer.”

When asked how he used the toilet properly, Fischer said crews have a foothold in front of the toilet so they don’t float away.

“That’s kind of important, because aiming is everything,” he said, which was met with screams of laughter. “You have to make sure you’re grounded.

When it’s bedtime, Fischer would get into his sleeping bag, hooked to a wall inside his aircraft and zip himself up.

“The coolest thing is we don’t need a pillow. Just relax your neck and you’re right where you want to be,” Fischer said. “You sleep like a baby, and I just love it.”

He also shared his opinion about Pluto when one student demanded to know why it wasn’t considered a planet.

“That whole Pluto [issue] is depressing. I think it should be a planet, too! It’s a cool name. Let’s let it be a planet,” Fischer said.

“We actually have a relative in the Air Force, who’s currently stationed in Florida, so we had to come learn about space,” Rodriguez said. “My kids loved it. They want to go to space now. I, myself, was so impressed and learned so much.”

Wright agreed: “I didn’t even feel like it was a kids event. I learned a lot and I’d definitely come back if another astronaut visits the museum again.”