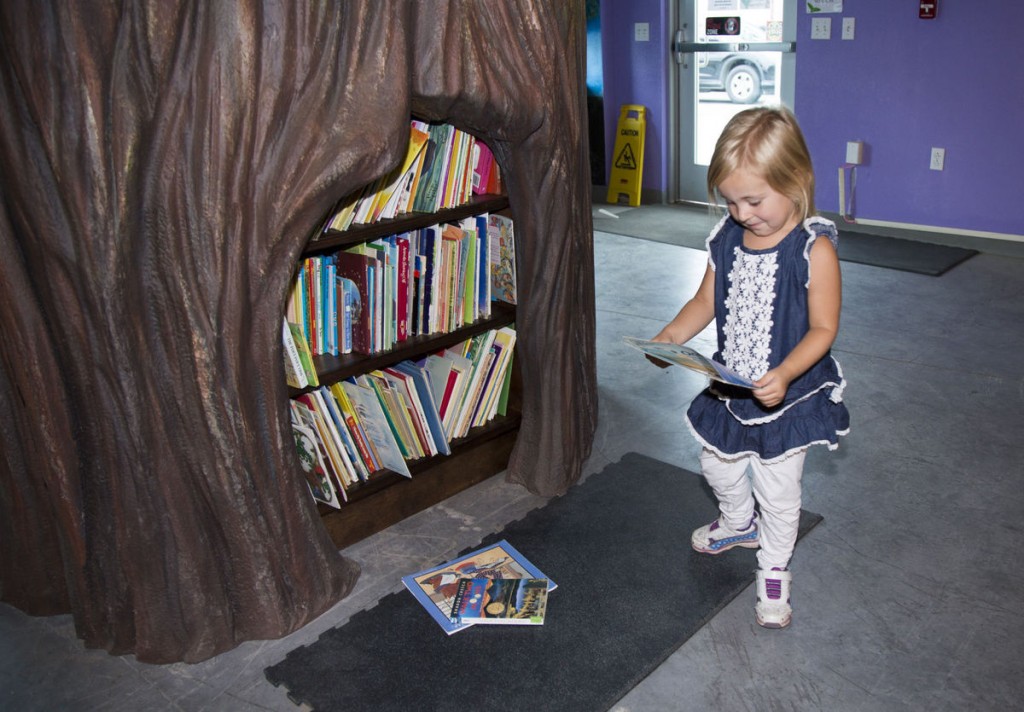 Minutes before doors open at the Santa Maria Valley Discovery Museum, a handful of families were already lining up in front of the building, excited to spend their Saturday morning testing out some new features the site had been working on for the past several months.

The Santa Maria Valley Discovery Museum had some exhibitions that weren’t quite finished yet, but nonetheless was offered to the public to give it a few test-runs and enjoy some of the new features donated by the city.

Some new features that were in the “soft-opening” phase included the Discoveryland Tree House, a real, life-sized tree house refurbished for children to climb or gather at the base of the house to read.

“We’ll be having some carpeting coming in and the walls will be painted, but it’s ready for people to give it a test run,” said executive director Chris Slaughter. “The focus of the treehouse is literacy…we wanted to create a reading corner, for kids to discover the world through the magic of books.”

Another exciting feature was the electronic recycling kiosk, donated by the city’s utility department, said Slaughter. The kiosk has a number of touch-screen features where kids can learn about the importance of recycling, the process of carbon footprints and other environmentally conscious topics.

Outside, taped off from the public, is the brand new Discovery Farms Produce Truck, which will be open to the public within the next few weeks, said Ana Dominguez, volunteer coordinator.

The truck, which has been donated and re-purposed into a playground area, has been discussed by staffers and board members for a year before finally making their visions come true, said Dominguez.

“We’re a farming community here in Santa Maria, so kids will learn how items get transported from the field and we’ll be putting in a crane, with strawberries in the truck,” she said. “This is a strawberry town — this is what we’re about, this is what we do. There are people who work in the fields picking berries, vegetables or are ranchers themselves.”

The focus of the truck, along with many other features in the museum is to bring Santa Maria to life, keep it relevant and local to the city’s features, while putting a fun spin to an otherwise educational purpose.

“We even have a gardening area in front of the truck where we’re growing our own tomatoes and lettuce,” said Dominguez. “We really want to focus on the idea of farm-to-table education. Parents and kids are already so excited about it, even though it’s not open yet.”

“We just really want kids to be proud of their community and know what we have, and understand the history of how Santa Maria came to be.”

In addition to their farm-to-table theme, the museum also features a new Science Saturday educational program, at 11 a.m. and 3 p.m. Saturday’s event focused primarily on the science of cattle and agricultural farming.

Instructor and marketing assistant Josh Kitchen said the purpose of the presentation was to teach kids differences between dairy and beef cows, scientific facts and farm-raising.

“We always try to tie our activities to current events, either local or national,” said Kitchen. “Next week we’ll be doing a feature on electrolytes.”

Amber Walz, 31, of Santa Maria, said she brings her 16-month-old son Bailey to the museum as often as once a week, after hearing the rave reviews from friends.

“Bailey loves coming here,” she said. “He really likes the Catching Air feature and the Moxie Cafe set. It’s just nice to have something for him to do outside of the house, and it’s educational.”

Barbara Deuitch and her husband Doug Deuitch brought their 3-year-old grandson Callan for the second time to the museum, so that he could mull over the catching air jets, the new treehouse and the aquatic animal displays.

“Callan loves the toys in the museum,” said Barbara. “We always knew this museum was here, and we originally thought he was too young for it.”

“But this museum never gets old for Callan,” she continued. “He can always spend a long time in here because there’s a bunch of stuff to see and do…it’s a neat idea and we all really like the museum a lot.”

While the museum is still awaiting the official grand opening reveal for the new features, staffers are always on the lookout for new things cooking up or brewing for the community.

The museum’s sustainability is made possible by private funding from local businesses and individuals who help fund the nonprofit, said Slaughter, and hopes to continue to maintain the museum in the future.

“We’ll have our official launch in the near future, and this is just the beginning,” said Slaughter. “This is the denouement of a three-year effort, and we’re so excited to reveal everything because we want the museum to rise to the level that our community deserves.”

For the complete article and gallery of photos click here!