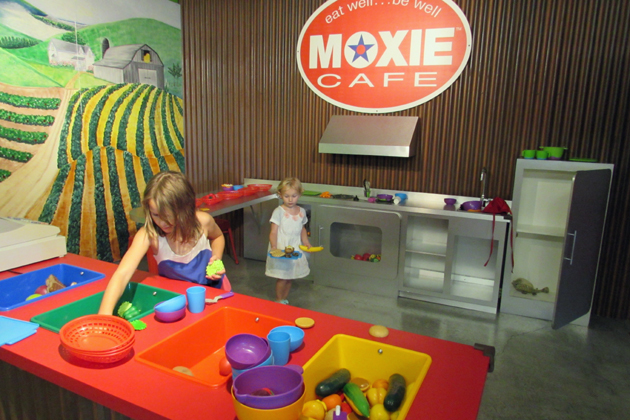 The organization marks its 20th year with new exhibits, including Catching Air, a ‘new favorite’ for people of all ages

A cooking camp set for next week at the Santa Maria Valley Discovery Museum will help youths find out that food can be healthy, tasty and fun.

The “Food Is Fun!” cooking camp is one of four special weeklong sessions designed for youths in the summer.

“It’s a little bit different from our other camps because we’re bringing in volunteers from several different food, fitness and nutrition-related organizations to offer an expert-led, hands-on cooking experience for the kids,” said Amy Blasco, Discovery Museum program director.

Good nutrition and healthy lifestyles are important to the organization and promoted through events and exhibits such as the Moxie Cafe.

Added in the spring, the exhibit is modeled after the Moxie Cafe on West McCoy Lane, where the motto is “eat well … be well.”

Signage to be added to the exhibit will tout “the importance of eating a rainbow, which is a colorful diet with lots of fruits and vegetables,” Blasco said.

The exhibit also will display information about Choose My Plate, the government program replacing the traditional food pyramid and using a plate to show serving sizes and food groups.

Specifically, the cooking class will feature the science of food experiments while also teaching food and kitchen safety.

On another day, the focus will be fruit preservation, while cake decorating will be the topic on the next day, with youths getting a chance to put icing on a cake and decorate it while also learning about the importance of eating fats and sugars in moderation.

Representatives of a CalFresh presentation, “Learn, Grow, Eat, Go,” will focus on a healthy lifestyle while also having fun.

“One thing we learned with the kids is it was wildly popular,” Blasco said, adding that some of the events attracted 100 kids. “The kids are really excited to get into the kitchen and to experiment with food, try new things and really be their own master chefs. I think a lot of times kids are just given food and told you need to eat this because it’s good for you.

“But this camp is about showing them that food can be fun and exciting and tasty at the same times.”

Games, centered on food, will serve as icebreakers with contests of making the healthiest snack with faux food or playing food bingo, according to Josh Kitchen, program and marketing assistant.

The cooking class, aimed at children ages 6 to 10, kicks off Monday and runs through Friday at the Discovery Museum, 705 S. McClelland St., meeting from 1 p.m. to 5 p.m.

The fourth and final camp of the summer, “Art Around the World,” also is geared to youth ages 6 to 10 with graphic designer Heather Walter featuring projects including ceramics, mosaics, pastels and painting.

Openings remain for both camps, which cost $85 for members and $100 for nonmembers with registration available online by clicking here.

The summer camps come during the Discovery Museum’s 20th year and the arrival of several new exhibits, including a magical treehouse and a donated produce truck to be installed within weeks.

Another exhibit, Catching Air, sponsored by the Santa Barbara County Air Pollution Control District, lets youths — and adults — put scarves and yarn balls into tubes, watching as they travel a circuitous route before popping out.

“It’s definitely our new favorite exhibit for people of all ages,” Blasco said.

On Sept. 18, the Discovery Museum will host the third annual Superhero Fun Runwith children and adults donning costumes while getting some exercise.