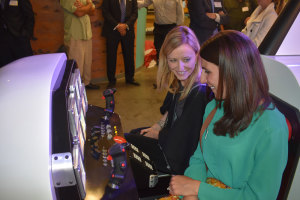 Alison Ventura and Jennifer Jipson take a test ride in the Santa Maria Valley Discovery Museum’s new space shuttle exhibit during a special reception for the unveiling of a new partnership with Vandenberg Air Force Base. (Janene Scully / Noozhawk photo)

A space shuttle exhibit has landed at the Santa Maria Valley Discovery Museum with an unveiling Wednesday night when officials also revealed a new educational partnership with Vandenberg Air Force Base.

Military representatives and Discovery Museum leaders showed off the new exhibit during a special event attended by 75 people. Officials announced plans for the multi-phase project made possible by the signing of a first-of-its-kind, educational partnership agreement.

“On behalf of the entire Vandenberg Air Force Base, we’re really proud of this partnership, and we want to thank you for allowing us to be part of it,” said Col. Chris Moss, 30th Space Wing commander. “For us, it seems like a very natural fit.”The mini replica of the Discovery space shuttle marked the first piece of the planned hands-on, educational Vandenberg Launch Experience, a state-of-the-art science exhibit meant to mimic critical roles in launching rockets.

“I can’t imagine anything more exciting than for kids to be able to sit at a launch control console and feel like they are responsible for launching a rocket,” said Kevin James, a member of the Discovery Museum’s Aerospace Advisory Committee and an engineer at defense contractor ManTech International.

“That’s the kind of experience we’re trying to create for them,” James added. “We want to create a challenging hands-on experience. We call it part-theater and part classroom.”

The mock shuttle actually was a salvaged child’s bed “tricked out” by the Vandenberg Training Device Design and Engineering Center to become a tool for sparking children’s interest in science, technology, engineering, arts and math.

They spent 1,000 man hours — when they weren’t doing mission critical chores — to convert the bed into a replica shuttle, using $3,500 for materials.

The tiny orbiter also remembers a former TDDEC member, Weldon Kurt Lindberg, who died in December, and had helped with the exhibit in its early stages. His name is painted near the tiny cockpit.

Adults at the unveiling found the mock shuttle irresistible, with many taking a seat behind the joysticks. 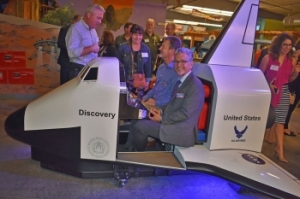 The new educational partnership allows the use of government funds and resources for the exhibit, and falls under the Air Force’s new STEM outreach effort.

Tom Stevens, deputy director of the 30th Launch Group and STEM coordinator at Vandenberg, said the education partnership agreement looked to build a bridge between the military and museum.

“It’s a great opportunity for us to reach out and showcase launch activities at Vandenberg for the students who come through the museum here,” Stevens said.

While the first phase involves the replica shuttle, the second phase calls for a hands-on exhibit in which children can pretend to oversee launch communications and countdown to blastoff.

A PCPA set designer crafted the model of the completed exhibit, with the miniature example displayed at the Discovery Museum.

The Air Force is heavily invested in seeing the exhibit get completed, with $20,000 provided last year to start purchasing parts, James said.

“It will leave a lasting legacy for kids, something they’ll really remembers,” James said of the Vandenberg Launch Experience. “And if we’re successful, it’s just igniting their imagination and capturing their enthusiasm. Maybe they’ll find a future career in STEM.”

The idea for a space-themed exhibit sparked more than two decades ago as an idea from Discovery Museum board member Bill Thompson, museum Executive Director Chris Slaughter said.

“He really wanted an exhibit that displayed space prowess and everything Vandenberg does,” Slaughter said, adding Thompson’s vision fueled efforts to make it reality.