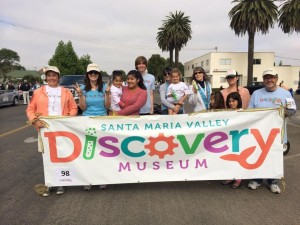 SAY YES! This is one of my three life mottos. It is the one that has brought me the most joy and sometimes the most challenge. I like to say “yes” as often as possible and always when I feel I have nothing to lose. I have said “yes” to many philanthropic opportunities from being a room parent to chairing charity events and hosting Olympic athletes, to leading an inaugural annual campaign and being an integral part of a successful capital campaign. All traditional roles when one thinks about philanthropy. I had my ears and eyes open every step of the way (motto # 2) and had the great pleasure of learning something from everyone I met (#3!) during each of them.

The most rewarding and challenging “yes” came four years ago. It was a time of transition for me in many ways and looking back I cannot be more proud of the job I have done. In the fall of 2012, I received a phone call from an old friend and colleague in Santa Maria asking if I would join her in a meeting with the Executive Director of the Santa Maria Valley Discovery Museum. That was a small “yes.” What came next was a huge time, energy, and emotional commitment to a community treasure that needed our help and expertise. It was a big YES from both of us….because, we asked ourselves, how can we not do this? After all, we are the only children’s museum in Santa Barbara County.

What followed was many, many hours put toward a revitalization effort. From meeting with funders to fixing lightbulbs, to stewarding a small staff and creating new special events – I said “yes” every step of the way. I took on the role of board leadership and my friend, Chris Slaughter, added the title of Executive Director to her CV and, together with our gang, have nearly doubled the budget we were handed. We do not see things slowing down any time soon!

I have been accused of being an optimist and always try to see opportunity when presented with a challenge. Over the last four years, I have raised funds, friends and a fantastic board of directors. We have taken the museum from busted to a shining example of what a dedicated group of people can accomplish.

Many people have complimented me on my leadership and stick to it attitude. With these two attributes, I have helped to forge partnerships and growth for many agencies in the community by encouraging open dialog and collaboration. The Discovery Museum has been a place for all sorts of partnerships: Arts Fund Santa Barbara, Allan Hancock College, Dignity Health, City of Santa Maria Rec and Parks, Santa Maria Chamber of Commerce, Vandenberg Air Force Base, Santa Maria Bonita School District, Santa Maria Police Explorers, American Kite Flyers Association and the list goes on.

When I think of philanthropy, I think of people. It is people with heart and dedication to their passions that make a community vibrant and thriving. I have already said “yes” to my next opportunity and look forward to listening and learning all along the way!

Diane Adam is the Vice Chair of the Board of Trustees of the Santa Barbara Foundation.