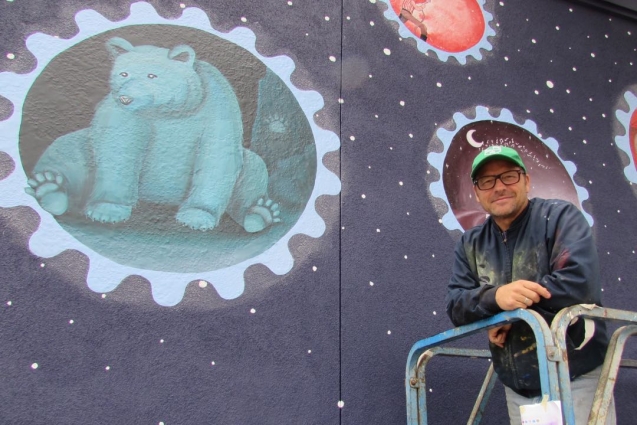 Allan Hancock College art instructor John Hood helped coordinate a student-designed mural now adorning a wall of the Santa Maria Valley Discovery Museum. “All of this was their design,” he says of the nearly two dozen teenagers. “It was a great collaboration.” (Janene Scully / Noozhawk photo)

A close-up look at Santa Maria Valley Discovery Museum exhibits inspired a teen-designed mural now adorning an outside wall on the building.

A public unveiling is planned for 10 a.m. to noon June 6 at the Discovery Museum, 705 S. McClelland St.

“They were completely inspired by the museum,” said Amy Asman Blasco, program director. “It’s beautiful and we couldn’t be happier. “

Hood met with the Santa Maria Valley high schoolers for several weeks at theAbel Maldonado Community Youth Center, where they collectively came up with the design, executed it and installed it with the help of local adult artists.

Against a dark background with white dots to represent stars or snow, the mural features panels shaped like gears, turning museum exhibits into art on 5-foot-by-5-foot panels. Each panel reflects a key exhibit in the Discovery Museum.

The tree that sits on the sidewalk blocking some of the wall became part of the mural — a shadow of the tree is on the wall and a youngster leans against it reading a book. At the wall’s western end, a child blows bubbles.

“It’s kind of like a day dream,” Hood added.

He said many of the teens involved in the project didn’t have any art experience.

“This was a first for a lot them,” Hood said, while standing on a scissor lift used to reach upper areas where he worked to glue the panels on the wall.

Throughout the mural workshop, the youths worked diligently on their artwork, he added.

“All of this was their design,” he said. “It was a great collaboration.”

The nonprofit Discovery Museum, which opened in 1996 and now is housed in 13,000 square feet of space, has 40 exhibit areas aimed at providing “learning fun.” The museum also hosts weekly programs and special family events.

“We’ve been wanting a mural for a long time,” said Blasco, who added that they are especially excited the wall includes works of young artists.

The Teen Arts Mentorship Program is funded by The Morris B. Squire Foundation and others.

The program has occurred sporadically in Santa Maria.

While the Arts Fund typically tries to limit mentorship sessions to 10 teens to ensure they each receive one-on-one time, Ricci said they decided to include all 20 who applied for the Santa Maria project.

Diane Adam, who serves on the boards of the Santa Barbara Foundation and Discovery Museum, reportedly helped connect the various participants — museum executive director Chris Slaughter, who offered up wall space; Santa Maria Recreation and Parks Department representatives who allowed use of the youth center room for the workshop.

While seeking a mentor, one name — John Hood’s — came up repeatedly, Ricci said.

“We met with him and he was game,” Ricci said.

The panels created on special material meant the artists didn’t have to spend a long time on Santa Maria’s windy spring days while standing on scaffolding to paint, Ricci said. It also allowed teens to create their own art within the larger mural.

Those involved in the project are enthused about the finished artwork.