A new partnership between the Santa Maria Valley Discovery Museum and 30th Space Wing at Vandenberg Air Force Base will allow children and families across the Central Coast to explore the fascinating world of aerospace science.

Phase two of the Vandenberg Launch Experience — a hands-on, state-of-the-art simulation of the rocket launch process — was unveiled by base officials and Discovery Museum staff on Monday evening, less than two weeks ahead of Vandenberg’s historic May 5 mission to Mars.

“This has been a tremendous collaboration for the past two-and-a-half years,” Chris Slaughter, the Discovery Museum’s executive director, told the crowd. “The talent that came together to put together this exhibit, shuttle and programs for the future is really a priceless thing.” 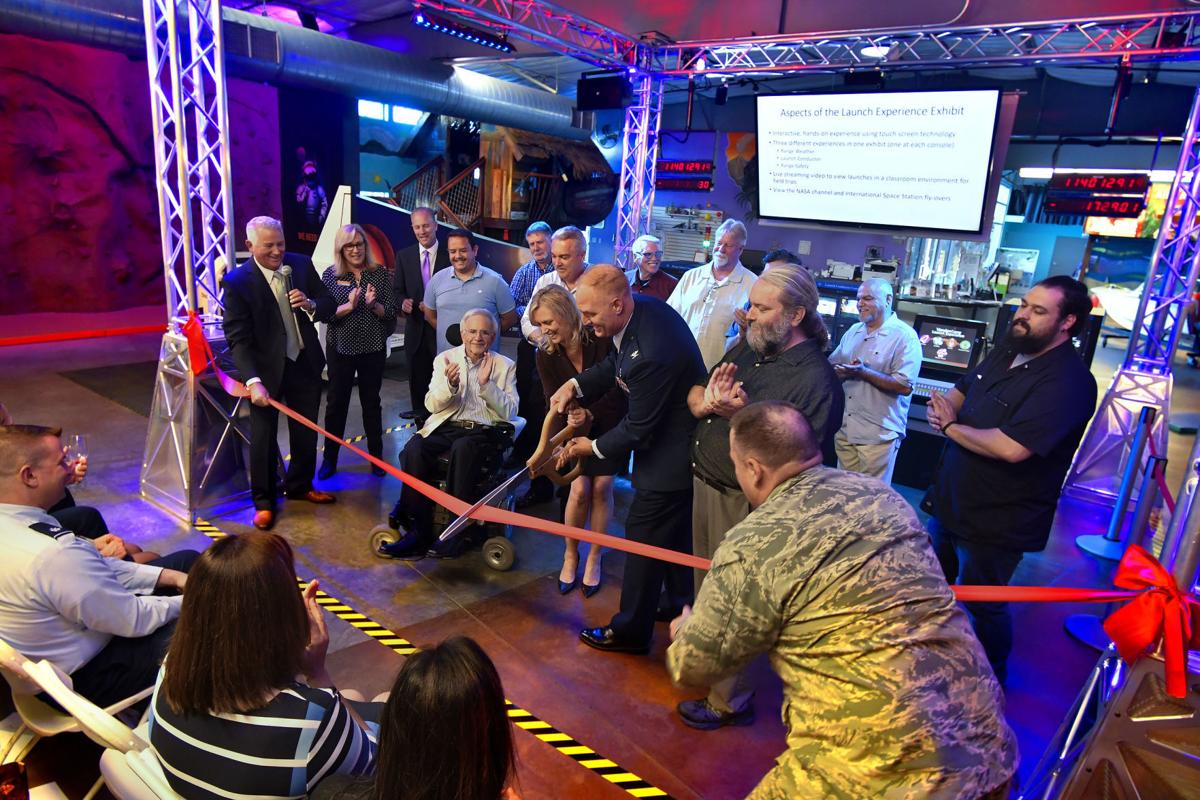 Developed through an educational partnership agreement between the Discovery Museum and 30th Space Wing, phase two features a mock mission control (crafted from repurposed United Launch Alliance launch consoles) for children of all ages to oversee a simulated launch sequence, and includes a mounted array of monitors that play historical and live video feed from the base near Lompoc.

Phase two of the exhibit complements the replica Discovery space shuttle that was installed last year, which gives kids the opportunity to oversee launch communications and countdown to blast-off with authentic audio recordings from NASA’s Space Shuttle Discovery.

“Most of the Santa Maria community did not really know what went on at Vandenberg — it was like an island,” explained Discovery Museum board member Bill Thompson, who wanted to bridge the connection between the base and its surrounding area. “We didn’t have that connection to Vandenberg.”

Described as part theater and part classroom by Tom Stevens, the 30th Launch Group’s tech director and STEM coordinator for Vandenberg Air Force Base, funding for the project came from various of grants, donations (both monetary and material) and volunteer hours.

Volunteers clocked more than 1,000 hours to fabricate, test and install the exhibit, according to Stevens. The U.S. Air Force contributed approximately $30,000 in funding over the last two years, with more anticipated in 2018.

Stevens said the project recently received a $200,000 grant from the U.S. Department of Defense to put toward expanding and improving the exhibit’s programming.

“We’re going to advance this to go beyond launches,” Stevens said, touching on opportunities to include the base’s environmental processes, orbital debris tracking and missile launching arms. “There are all kinds of other things and scenarios we want to integrate and incorporate.”

Leading up to the May 5 launch, the Discovery Museum will host scientists and engineers from NASA and the Jet Propulsion Laboratory from 10 a.m. to 4 p.m. on May 2 and 3. Touring the state as part of the Mars InSight Roadshow, families will get to participate in hands-on science activities while learning more about InSight’s mission.

Children will also have the opportunity to make mini space shuttles and other space-themed projects as part of the brand-new Central Coast Makerspace. The makerspace will be at Hancock College’s Friday Night Science from 6 to 8:30 p.m. on May 4, and at the Discovery Museum from 10 a.m. to 4 p.m. on May 5, the day of the launch.

The Santa Maria Valley Discovery Museum is located at 705 S. McClelland Street, and is open Tuesday through Saturday from 10 a.m. to 5 p.m., and Sunday from noon to 4 p.m. Admission for both children and adults is $6.